We have examined several on screen appearances of the PIAT previously, in this article we will look at a scene from the 2014 Polish movie, MIASTO 44 or City 44/Warsaw 44. The film follows a group of young members of the Home Army during the Warsaw Uprising.

In the scene we’re going to analyse today a Home Army squad are in a defensive position on the first story of an apartment building when a German Goliath remote controlled mine approaches their position. They immediately open fire on the Goliath with small arms, some rifles, a couple of submachine guns including a Sten, a PPSh-41 and an MP40 as well as a captured MG-42. While they’re pretty well armed, they’re low on ammo.

With the small arms fire ineffectual the squad leader calls for the PIAT. The Home Army had an estimated 70 PIATs at the start of the uprising. The British Projector, Infantry, Anti-Tank was the Pole’s primary infantry anti-tank weapon. By the 12th September the allies had managed to drop more PIATs bringing the number available to around 250.

What’s so special about this scene is that it depicts the cocking of the PIAT! As the others open fire the PIAT number one can be seen rotating the outer casing to unlock it and then pulling it up until the spring inside is cocked. He then lowers the casing and locks it ready to fire. We don’t see it but the No.2 has loaded a bomb into the bomb support tray and the No.1 places the monopod on the sandbags and takes aim.

So not only do we have photographs of the PIAT in use at Warsaw we also have some good accounts of its use, one from Zbigniew ‘Deivir’ Czajkowski, a corporal and patrol leader with the Home Army’s ‘Parasol’ scout battalion describes using a PIAT against a German tank during street fighting. Czajkowski describes how the man about to fire the PIAT had forgotten to prime the bomb, he then describes firing on the tank below their position:

“I press the heavy weapon into my shoulder. The tank is in front of me, as if on a plate. I can see the enormous armour plating and the smoke coming from its muzzle. I set my sights. Slowly… carefully… The tank fires, below us again. I aim just behind the turret. There! I squeeze the trigger. The PIAT recoils, the round flies through the air… nearly there… It misses the tank and explodes to the rear of it. “Fuck!” Now my colleague tears the PIAT out of my hands. I don’t stop him. I load a new round. Two more shots from the tank. Presumably they haven’t noticed us. Suddenly it dawns on me – we’re on the second floor! “Aim lower, much lower, under the tracks. We’re too high up here.” The barrel of the PIAT tilts down. I’m oblivious to everything glued to the gap in the wall. The weapon barks. There’s a flash of light against the side of the tank. Got him! The tank is momentarily covered in smoke.”

While not a tank, the Goliath seen in the film, were used during the fighting in Warsaw. The Goliaths were armoured, remote controlled bombs could be steered from cover. These tracked mines could deliver a 60 to 100kg payload of high explosive. Enough to destroy positions and heavily damage buildings. A pair of Goliaths are also seen in the earlier Polish film on the uprising – 1957’s Kanal – which also features a PIAT, albeit a wooden mock-up, which takes on a German tank.

In Warsaw 44 the PIAT No.1 manages to land his bomb just in front of the approaching Goliath, the blast apparently is enough to break one of the mine’s tracks – perhaps shrapnel or debris struck it. The victory is short-lived, however, and the Polish position is raked by machine gun fire – killing the PIAT No.1 – and a full German assault follows.

The film’s depiction of the PIAT is quite good, although the PIAT appears to be cocked very easily. The weapon’s recoil seems a little light but is represented with the No.1 being sharply pushed back. There is a short flash as the remains of the bomb’s propellent cartridge are seen as the bomb leaves the spigot. We can also see that the spigot is still visible in the bomb tray, meaning the weapon has not re-cocked itself.

The PIAT gave the besieged soldiers of the Home Army a much-needed weapon capable of taking on enemy armoured vehicles. But a few dozen PIATs weren’t enough to turn the tide and the valiant Poles were forces to surrender after two months hard fighting. The film, Warsaw 44, gives a pretty immersive idea of what the fighting in the city might have been like and is worth checking out.

( First published on The Armourers Bench ) 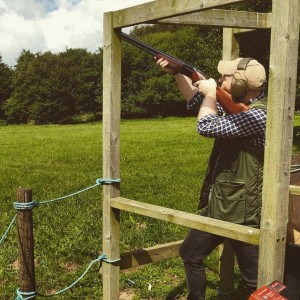